Practice subtraction with regrouping in a fun way!

Many researchers have looked deeply at the impact of personalization of word problems on student achievement. Bailey notes that students “don’t care how many apples Bob gave to Suzy. They’re much more interested in things like music, video games, movies, trading cards, money, and friends” (Bailey, 2002, p. 61). Giordano (1990) maintains that, “student fascination […]

I once heard a teacher say that number sense cannot be taught. This made me wonder what then became of her students. Did they just sit in a classroom all year without gaining any new knowledge as the teacher moved from topic to topic? Maybe they eventually tuned out and began to hate math. The correct thought should be that it is possible to teach number sense. It may take longer for some people to learn but it is absolutely crucial. Without number sense most elementary school math concepts are inaccessible. Topics such as fractions and the meaning of the equal sign cannot be understood without a student possessing a firm grasp on how number sense.

According to mathisfun.com, number sense is defined as “a person’s ability to use and understand numbers”. That website also defines mathematics as the study of numbers, patterns, space and change. Number sense is involved in all four of these areas; it is needed for addition, subtraction, multiplication and division. Students with strong number sense can easily discern relationships between operations which makes it easier to master the learning of math facts. These children are able to decompose numbers in various ways and discover patterns among numbers on a hundreds chart. They can explain regrouping rather than simply doing the algorithm. They are also capable of subitizing, knowing how many items are in a group without counting. Place value, estimation and rounding are usually concepts that these students approach with little difficulty since they know where numbers are located on a number line or chart. All these skills combine to create strong problem solvers who can reason and make sense of fractions and decimals later on.

Fractions and decimals are routinely challenging for students. For students with poor number sense these topics are daunting. If whole numbers make no sense, how can fractions and decimals make sense? These are also concepts that are taught later in the year near state testing time. The risk here is that students are not given sufficient time to gain a deep understanding. They are unable to determine if their answer to a word problem makes sense or even what operation to choose to solve the problem.

Here are a couple illustrations:

Charlene has ¾ of a cake leftover from her birthday party. She wants to share it among 6 of her friend. How much of the cake will each friend get?

A student with strong number sense would know that the answer has to be less than ¾. He would realize that Charlene no longer has 1 whole cake; the new whole is ¾ of a cake. This student may simply go through the motions of dividing a fraction by another, you know the old invert and multiply move. However, it takes number sense to be able to represent the problem with a drawing and reason as to why the answer is 1/8. Many students would not even realize that the actual solution expression is ¾ ÷ 6 and not 6 ÷ ¾. They rely so much on the bigger number being first in division that they do not reason about the problem!

So basically, it comes down to the fact that we can teach children to add, divide, multiply and subtract all we want. However, if we want them to be successful, we must teach them to reason and make sense of our number system. We will look at ways to improve number sense later on.

Here is my newest Math Jeopardy game for third grade.

Here are links to my most recent review games. 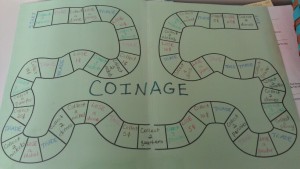 It’s been quite a while since I posted anything. I recently made a coin game to help second graders who were having trouble with coin recognition. It actually went over well with the small group of 4 that I played it with. They had several opportunities to identify coins and their values and to make trades.I made a paper die since I really don’t enjoy the sound of dice rolling across a table or desk. Hmmm…I think I will be doing more of these. 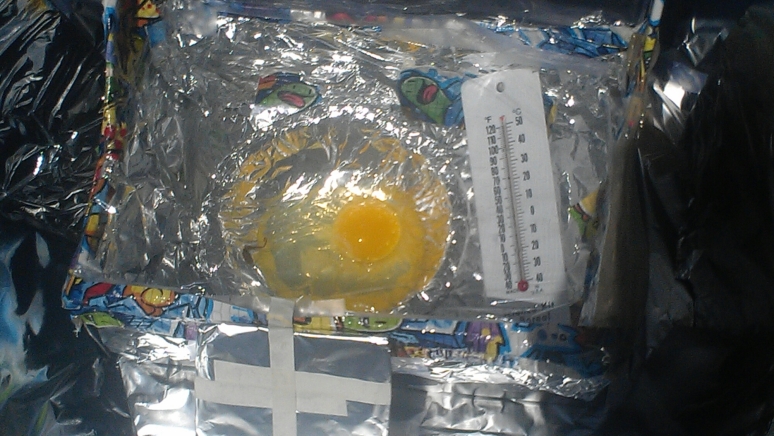 An example of a simple engineering project that incorporates science and math easily.

Here is a lesson I did in a third grade classroom using a two step problem from the illustrativemathematics.org website. Students discussed the problem in groups, then took turns writing the steps used to solve. Their directions were then given to another group. That group had to follow the directions to solve. See videos below to hear some of their discussions.